Shinjuku Central Park was planned in 1960 as a metropolitan park on the site where the Yodobashi Water Filtering Plant was once located. It was opened in 1968 and formed a link in the chain of the new city center project. In 1975, it was transferred from the Metropolitan authorities to Shinjuku ward. After this, it underwent large scale makeovers to become what it is today. With an area of 88,000 m2, it is the largest park in Shinjuku operated by the ward.
The park is divided into three areas, the North, East and West areas. These areas are connected by park bridges. The East area has an athletic ground where people can jog, play futsal and so on. The West area features a water play pool and playground, which are popular with children, while the North area comprises of “Citizen’s Forest”, a biotope, a water plaza, a lawn area and a sports corner.
Shinjuku Central Park is an urban oasis meeting the diverse needs of its visitors who range from local residents and people who work in the neighboring high-rise office buildings to overseas tourists. 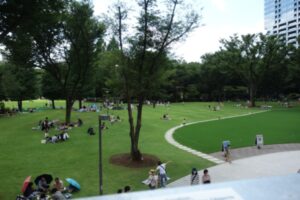 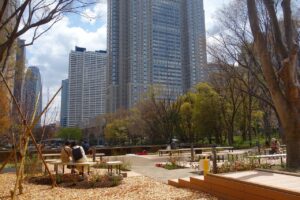